Wifi Pumpkin is supported by Kali Linux, Parrot OS, Pentoo, and Ubunto. Wifi Pumkin can be installed by cloning the framework from github and running the installer  as shown in the following commands.

Isc-dhcp-server and php5-cli are optional. The dependencies can be installed by running the requirements.txt file as follows.

Wifi Pumpkin can be used in many ways. For demonstration purpose, we are going to create a rogue access point where anybody can connect without requiring any credentials. Wifi Pumpkin requires Ethernet and wifi adapter to make wifi access point. Run the following command to check the available wifi interface.

If that does not work, run the same command with sudo option i-e

Once the Wifi Pumpkin interface is opened, go to plugins tab to select the desired plugins for auditing or simulating the wifi attack.

The next step is to configure the access point from the settings tab. The settings tab offers different configurations to adapt, such as Access Point setting (configuring SSID and BSSID, choosing the network adapter), activity monitor setting, and DHCP setting. In the settings tab, there is an option of enabling the wireless security. Keep it unchecked for creating rogue access point without any credentials. 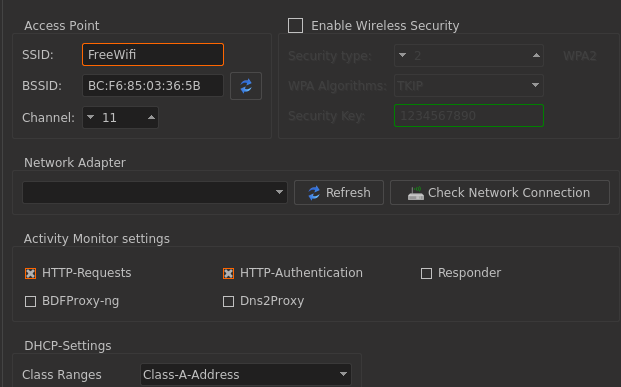 After the settings are complete, hit the start button to allow the access point to broadcast the free wifi in the vicinity.  Wifi Pumpkin has an activity monitoring window that captures all the traffic of the users who are connected with the rogue access point.

Wifi Pumpkin is a decent penetration testing framework that can easily simulate wifi attacks for security assessments. The GUI interface makes the framework usage less technical. As a result we will be awarding this tool a rating of 4 out of 5 bunnies.