Air travel is expensive, and a savvy consumer will do everything in his or her power to save a little scratch. A Greek student claims he’s found the secret to affordable air travel: a simple iPhone hack that can fool any modern airport and get you a seat in first class for free.

Anthony Hariton, a computer science student at the University of Crete, plans to present his findings at next month’s Hack in the Box Security Conference (HITBSecConf) 2014 in Amsterdam. His presentation, entitled “Exploiting Passbook to Fly for Free,” will theoretically tell users how to generate fake boarding passes using only a computer and an iPhone.

Passbook is an iOS app that lets you scan in everyday items such as movie tickets, gift cards and boarding passes so that you don’t have to deal with paper or plastic when out and about. By storing a boarding pass in Passbook, a traveler can present a boarding pass without having to slog through email or print out a paper copy.

Exactly how Hariton purportedly used Passbook to generate convincing boarding passes will be a mystery until next month, but he claims that the process is simple enough for an everyday user. The frugal traveler will also need a good poker face and nerves of steel, though, as Hariton suggests that “social engineering and a few more tactics” will have to complement the software. 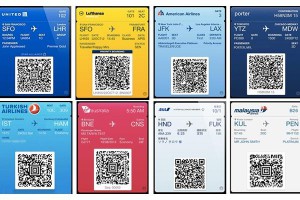 Until next month, it will be hard to say if the process could really work, but Hariton’s Twitter feed suggests that he has already gotten away with this trick at least once. Greece is part of the Schengen Area, which requires no passport controls among member countries, so Hariton could theoretically fly as far as Iceland, Spain or Finland without having his papers checked.

Tom’s Guide remains skeptical, however. Falsifying a boarding pass requires creating a very specific barcode and usually ties your name to a seat. Without knowing which seats on a flight are empty, your odds of choosing an unoccupied spot are low.

Furthermore, creating a fake boarding pass, and taking a seat on an airliner with it, represents at least two distinct crimes: fraud and theft. Getting arrested on the spot and having to go to court could really ruin your impromptu vacation.